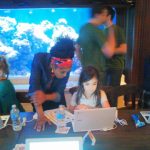 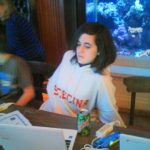 Yeah, I got this… 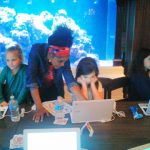 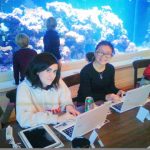 Tuesday, I was there most of the day as a proctor where I floated around the room and helped people when they got stuck. There wasn’t much getting stuck… other than people needing an occasional hint. The best part was the involuntary yeahs! and “yessss!” that you’d hear when someone completed one of the more difficult lessons.  Young, old, it didn’t matter. Programming is actually fun.

Programming is also an insanely good career choice. There are lots of jobs, lots of great employers and a dizzying choice of industries and areas of interest to work in. Since the one thing computers just aren’t good at is programming themselves, career prospects are very, very good. So good that Eleven Fifty is betting that there are enough people wanting to learn to code, that they’ve created one week boot camp classes that are designed to teach what would take 14-16 weeks in a traditional classroom environment.  I think Matt, Scott and the Eleven Fifty team are on to something really big. You don’t need four years of computer science to be a programmer. No matter what anyone says, programming is a portfolio career. We don’t need certificates and degrees to see if you can code. We can just look at your code you’ve made to date. So, to be a professional programmer, you just need to be able to program.

On Friday, I took my kids (four daughters and a son) and wife to Eleven Fifty so they could do the Hour of Code. They had a blast… and all agreed that the curly slide in the entrance was absolutely the best improvement in the history of home improvement.

Chromebooks are awesome. Eleven Fifty bought 40 Chromebooks for the event. The only issue was some users struggled with the touchpad, which works like a Mac rather than a Windows PC. After a minute or two of getting used to the two finger scroll, most people had the hang of it. For the most part, the buzz was about how nice the laptops were, and how “I think I’ll get one of these”.

Programming would be lots more fun if a successful build resulted in happy Angry Birds and shipping a bug resulted in Bad Piggies laughing at you. Instead we get cryptic messages: