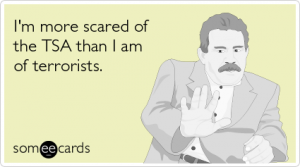 Want to send this card to someone? Click Here.

I don’t believe that the airport screening program has done anything to make us feel more secure. If anything, the TSA has replaced a tiny possibility of something bad happening with the absolute certainty that you will be hassled, virtually stripped, and potentially sexually violated. It’s as if we’ve found a way to take terrorism and replace it with something worse (sexual assault) so that people aren’t worried about terrorism anymore.

So, I did the American thing. I wrote my Senator, Richard Lugar (R-Indiana). To Lugar’s credit, he had is staff investigate by forwarding my letter to the TSA.

The good news: I got an answer (more on that later).

The bad news: Unfortunately, since the TSA appears to be quite vindictive, this may guarantee that the TSA will find some way to hassle me beyond reason on my next flight. I can see it already: “sir, you’ve been put on the no-fly list because you dared write your Senator about our systematic molestation system. Before you leave without getting on your flight, we have been ordered to scan you and give you a free enhanced patdown. We recommend you heed the advice of Bobby Knight.” 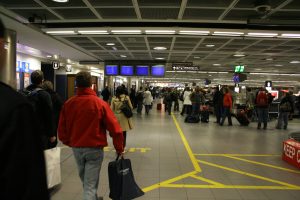 This is not the US. It's Ireland. It's illegal to photograph airport security in the US.

So, after a few months, the TSA actually replied, and Lugar’s office forwarded their reply to me. Ironically, I received the reply the same day (you can read it here) that a Federal court found that the TSA had ignored the law in rolling out naked scanners. Basically, the TSA’s reply made three points:

Where to start? First, people will always agree with security. If I poll the public and phrase the question right, it’s pretty easy to get agreement with unpopular policies:

[box type=”info”]Q: Do you support being shot in the head if it allows your family members to survive without being shot at all?

A: Yes, I’ll take a bullet to protect my wife and children.

B: No, please shoot my family starting from oldest to youngest.

Second, just because it’s legal does not mean it is right. Slavery, debtor’s prisons, and beating your wife have all been perfectly legal in the US in the past.  We make laws to stop abuses. Until now, no government program has decided that systematic x-ray vision voyeurism and sexual assault are a good idea to direct at citizens.

Finally, John Pistole may well be the smartest man in the employ of the United States Federal Government. Being smart does not excuse policies that systematically sexually abuse, humiliate and ultimately replace a chance of something bad with certainty of something worse.

TSA Response to Why Are We Groping People?

10 thoughts on “TSA Has Refined Insecurity”