If you have Netflix, Hulu or access any sites that stream video, you need to take five minutes to understand what net neutrality is. It’s not some complicated technical thing. It’s pretty simple: people want to take away your right to access what you want online. By what you want, we’re talking about legal content, not illegal infringements. Stuff like movies, phone service, websites, email recipients and music. It is exactly like replacing every superhighway in America with a toll road. It’s ugly, and it will sock you right in the wallet if you are caught flat footed: 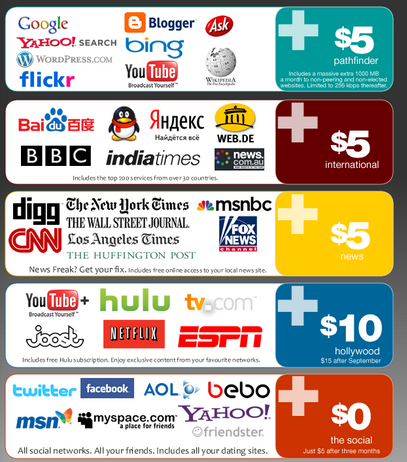 Many experts dismissed this idea as far fetched and said net neutrality was about some really complicated technical mumbo-jumbo designed to get you better Internet service. Turns out the artist who posted the above graphic wasn’t far off when he posted it on Reddit. Quietly, while you were getting ready for the relatives to come over of a big turkey dinner, uber-evil cable company Comcast (who I’m still mad at for their absolutely evil billing practices and automaton like customer service agents) who just held up backbone carrier Level 3 Communications:

Comcast wants Level 3 communications to pay a fee to Comcast whenever a Comcast user watches a movie that streams in from Level 3’s network.

How quaint. So now Comcast wants to make their segment of the information superhighway into a toll road, and if you are getting content from someone who competes with Comcast’s ridiculously expensive cable and on demand service (compare: $LOTS for Comcast, $7.99/month for NetFlix, no cable box rental required), Comcast is going to make the content provider pay. Why? It’s because cable TV is a failure on a live, on demand streaming world. Instead of realizing the cable TV model is dead, Comcast thinks the best way to proceed is to extort money. This isn’t surprising from a company that has consistently earned kudos like having the worst customer satisfaction of any company or government agency including the IRS (American Customer Satisfaction Index 2004, 2007 ).

Note: Personally, I hate Comcast and will never, ever, ever do business with them ever again. I had an incident involving canceling service and billing that I’m still mad at, and a Comcast customer service person accused me of "extortion." What did I do? I tried to pay my bill. Instead of taking what was due ($139 or so), they tried to hold me up for $500. Come to think of it I feel like Level 3 a little bit.